Several of my friends posted this picture over the last week, this year’s Hanukkah holiday; typically with a caption similar to the one I used. The photograph pretty much stands on its own. My thought was that with a date and author so precisely known, its story was likely to be easy to find and quite possibly interesting in itself, as a complement to this strong photograph.

And indeed, a web search for the caption quickly returns a number of sites in English which place the picture in its proper place in the history of the Shoah. Following the trail of texts in German, though, adds some extra historical texture and density. This is the story the way I figured it out. It clears up a small number of contradictions you may find in the most popular links in English, but otherwise claims no superiority to other ways of looking at it. I’ve relegated all references (mostly in German) to the end, if you care to read/watch further.

Kiel is a city on the coast of the Baltic sea. It’s the capital of Schleswig-Holstein, now a federal state (Land), then a province in the state of Prussia. It has a university, founded in 1665. Back in the 1930s, it had a large prosperous middle class — civil servants, professors, lawyers, doctors, people of trade and commerce — as well as a large working class due to its ship yards.

1932 is the year before Hitler came to power. The first day of Hanukkah 1932 was December 24, so the scene is about a month before Hitler is appointed chancellor, and three months until his organisation has dismantled the core of the democratic institution, and the totalitarian repression begins in earnest.

When thinking about the image, I first wondered about the large NSDAP flag on the building on the other side of the road. There had been municipal elections in Kiel that year. Did the Nazis already capture city hall? Turns out, no, that’s not quite how it went.

The building was the seat of the Nazi party (NSDAP) district organization. And across the road happened to live the photographer, Rachel Posner, who was the wife of Dr. Akiva Posner, rabbi of Kiel from 1924 to 1933, and their family. During Hanukkah 1932, her thoughts on the worrisome deterioration of the political situation, Rachel Posner took her camera and captured the image. There’s actually a little more to her creation: The back of the picture contains the time and place, in the spelling I used in the title of this post, as well as a short poem: 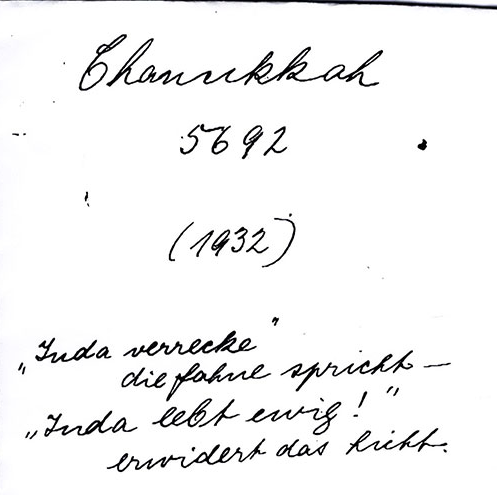 “Death to Judah,” says the flag –
“Judah will live forever,” replies the light.

(It rhymes in German, and is very much in the tone of the classical German poetry that would permeate upper secondary schooling then.)

1932 was a brutal year. One of the multiple elections, the July legislative vote, was the one where Hitler’s party jumped from a manageable 16% two years earlier to 37.3%, ahead of social democrats and communists combined, and far ahead of the republican conservatives. The SS and SA, which had been banned for a short while, terrorized the land. The violence was at this stage mainly between SA/SS on the one hand and KPD (communist) activists on the other. Nearly 100 people were killed in such clashes during a few short weeks in July. Public intellectuals, including such diverse personalities as Albert Einstein, Käthe Kollwitz and Thomas Mann, wrote a letter entreating the SPD and KPD to work together, but to no avail. The pro-republican conservatives weren’t any more able to overcome the divisions between each other, and between the political center and the SPD. This is the moment that the Weimar Republic failed. The brand new government breaks down pretty much immediately, and in yet another election in November 1932 the Nazi party is down to 33%. Yet another bourgeois-conservative minority government is formed.

Germany in 1932 was of course in the throes of the economic crisis. People were incensed, too, about the reparation demands following the defeat in World War I, and whipped up further by the nationalist extreme of the political spectrum. In Kiel, there was an additional disaster: The Navy training ship Niobe, manned mostly by naval officers-in-training, sank in July, in a storm off the coast. 69 people died, and much of the city participated in recovery and relief.

Anti-Semitic violence was somewhat secondary to the Nazis at that particular point in time:  Hitler’s priority was to influence an election, trying (and failing) to obtain a majority. (Jews made up less than a percent of the population in Germany in the post-WW1 borders.) Nonetheless it was never far away. Dr. Posner’s synagogue was attacked with a small explosive device at one point in 1932. His reaction appears to have been based on outreach and reason: he led guided tours through the synagogue, gave public talks explaining some basics about Judaism, and even participated in a public debate with people close to the NSDAP on the other side.

So much for the context in late 1932. And then the events accelerated. In January 1933, the last pro-republic (bourgeois right-wing) government fails, and Hitler is appointed chancellor. He immediately passes emergency legislation that suspends democratic rights, calls new elections in early March and starts to persecute socialist and communist politicians. In March, despite the incipient totalitarian terror, the NSDAP still remains short of a majority (at 47% of the vote). So coups are staged at the state and local level, proceeding via arrests of communist and some socialist politicians, voiding of the seats held by the KPD, and then a take-over. This is the beginning of the process called Gleichschaltung (“synchronization” or “bringing into line”) — a replacement of the democratic and societal institutions by Nazi-party equivalents. The Dachau concentration camp is opened on March 22, to be filled first with left-wing political opponents. Starting April 1, Hitler calls for acts of discrimination, boycott and violence against Jewish citizens and businesses. On a psychological level, this transparent appeal to the basest instincts of the German majority population was scarily masterful.

Back in Kiel, the key events are these: In the days following the legislative elections, the Kiel Nazis kick out the communist town assembly members as well as the (conservative) mayor and take over city hall. The next day, March 12, the first of two murders takes place that would particularly shake the Jewish community. The victim was the lawyer Dr. Wilhelm Spiegel, a social democrat, board president of the Jewish community, board member of the local community college, and a civil rights lawyer who in 1932 had defended a regional workers’ paper (the Volkszeitung) against libel claims by Hitler personally. The paper had accused him to pursue the objective of civil war. The newspaper lost the trial, and by March 1933 the paper was banned and dissolved. That evening, Dr. Spiegel is visited by two men (one in SA uniform), who claim to be police. He ushers them into his study, where he is killed with a shot to the back of the head. The murderers flee. The police (and local Nazi spokesmen) direct the suspicion towards the KPD. The funeral was a huge peaceful demonstration of anti-Nazi feeling. Spiegel’s eulogy is given by his long-term political friend, the SPD member of parliament Otto Eggerstedt. Eggerstedt himself was arrested soon after and died in a concentration camp in October 1933, shot under the pretext that he was attempting to flee.

The second murder follows soon after. On April 1, another Jewish lawyer, Dr. Friedrich Schumm, returns to Kiel for a family event. He visits the furniture store owned by his parents, but is stopped by an SS guard at the entrance, with a command  not to buy from Jewish businesses. Annoyed, he enters from the back, and comes out to the front together with his father. He draws a hand gun. One of the SS falls into his arm, and in the scuffle that follows an SS man is shot. Schumm flees at first, but later turns himself in. Even though there’s an order to move him to a different jail for his protection, the local police dawdle and ultimately let a lynch mob of 30-40 SS and other Nazis into the building. They shoot him and leave with no trouble.

The Jewish community of Kiel pretty much draws the correct conclusions from these events. It starts out numbering about 1000 people, about half (my estimate — sources vary) in Dr. Akiva Posner’s congregation. Many of them get out during the year of 1933. Overall, the Jewish population of Germany decreased by about 10% between 1925 and 1933, partly because of demographics but mostly because of emigration. The Posner family – with Rachel, two daughters and a son, travel first to Amsterdam and then the year after to Palestine under British mandate. Their grandchildren now live in Israel, as do the descendants of the widow of Dr. Schumm. Some didn’t want to leave, though. And the less affluent half of the Kiel Jewish community fared worse. These were Polish and Yiddish speaking “Ostjuden”, who were kicked out of formerly German areas that became Polish again after World War I, and who often didn’t even have German citizenship. They were much less able to flee and find countries to welcome them. Estimates put the number of Kiel Jews killed in Nazi concentration camps at about 250.

Here’s a picture of the Posner family at the Kiel railway station when they were leaving in 1933. The pictures are available in many places, but a good one is here. Also, see the references below. The NDR report shows the Posners’ grandson, in Israel, retrieving the Hanukkia for the holiday. It also shows footage of the  cantor of today’s newly-formed Kiel Jewish community at the sites of the picture. There still is no new rabbi in Kiel. 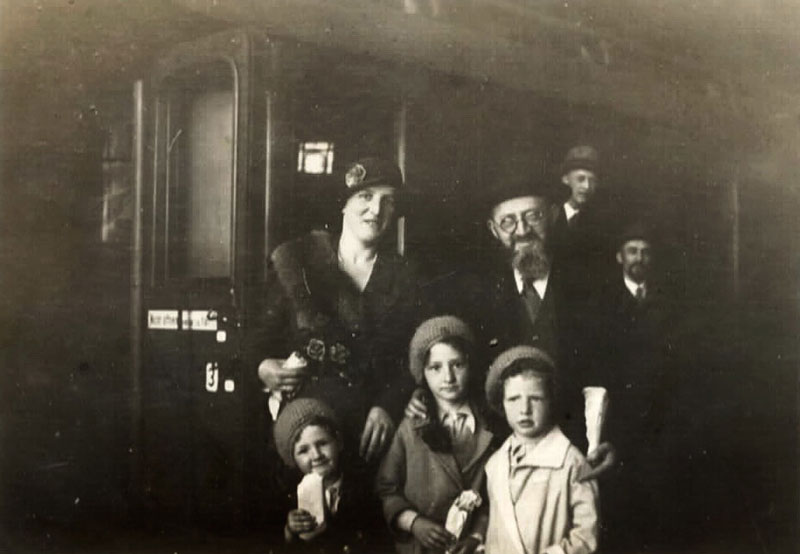 NOTE, 2015-12-15: Michael Palmer, who is an eagle-eyed archivist, wrote to me on Facebook pointing out that the Jewish year 5692 ran from September 12, 1931 to September 30, 1932. Hanukkah in 1932 was therefore in 5693. Conversely, the first day of Hanukkah 5692 was on December 5, 1931. So the date is, after all, not quite as certain as it seemed, and my account in the fourth paragraph of how the picture integrates with the wider events in Kiel and Germany may be wrong. However, I still think it’s unlikely that Rachel Posner got the year 1932 wrong – she likely functioned at least as much on the Gregorian calendar as on the Jewish calendar. Possibly a lot more, and especially so after fleeing from their home in 1933. Also, it’s easier to get a year wrong towards the beginning of a new year rather than at the end. There’s also a chance she got the Hanukkia/menorah out in early 1932, specifically to take the picture, though that would have been nearly three weeks after the end of Hanukkah. The NSDAP would have been less strong in 1931, but the hated flag was probably already up in display. Be that as it may, the rest of the story still stands.

Murder Dr. Wilhelm Spiegel:
at the city archives
at the virtual museum on the history of the Danish/German border region
in the SHZ newspaper

Murder Dr. Friedrich Schumm:
at the virtual museum on the history of the Danish/German border region
in the SHZ newspaper

Jewish population in Germany
at the Federal Archives

This work is licensed under a Creative Commons Attribution-NonCommercial-ShareAlike 4.0 International License.